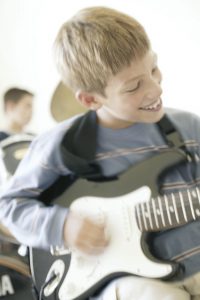 I was going to write a post on customer service in a recession but then I got distracted by a great article on improvised theatre posted on Innovation Tools. It made me realise that my original impulse – to post a piece on the recently-ended London Jazz Festival was the best one to go for as both the article and my experiences at the festival were inspirational and, yes, they do provide useful lessons for customer service.

Michelle James’ description of what, to many people, would be the stuff of nightmares – performing a play made up on the spur of the moment given just two locations supplied by the audience – is a remarkably good distillation of the essence of improvisation. In improvisation you are acting ‘in the moment’ and responding to what other characters are saying. The success of a performance depends to some extent on luck but also to the energy you bring to keep the whole thing going. And of course trust, collaboration and a readiness to share an agenda with other actors are absolutely essential.

Much of this was in evidence at the London Jazz Festival which this year was the biggest ever. That in itself presents a challenge – there’s just too much to see – but the three concerts I got to all illustrated different degrees of freedom within a set of constraints.

One of my favourite guitarists, Bill Frisell, was performing his music for films, including two Buster Keaton shorts. Here the level of improvisation was constrained by the need to illustrate the visuals – particularly in the Keaton, where the various pratfalls needed to be accompanied by the appropriate bangs and crashes – but there was still a great degree of interplay between the musicians.

A further degree of freedom was illustrated by piano legend Herbie Hancock with his sextet of virtuoso musicians. Here each musician got the opportunity to solo at great length, demonstrating astonishing technique but always listening out and responding to the others. Hancock himself – now 68 – had a timeless, ageless air about him as he was in total engagement with his music.

Finally – and coincidentally the concerts became less constrained by form as I progressed – I saw a group of Norwegian improvisers in an event – Punkt – where improvised sets in one room were then re-mixed by DJs and played back – with further improvisation – in another. Here there were almost no constraints – at least in the non-remix sets – and whilst the results weren’t always that interesting (to my ears), the air of invention and exploration was undeniable.

So – if you’ve made it this far – what do these way-out improv types teach us about customer service? Firstly, listening and responding is the key skill that distinguishes a flashy-but-boring performance from a genuinely exciting one and the same is true for interactions with customers: empathy in other words. Secondly, creating trust between participants is critical – most obviously in the improvised theatre example – and this goes as much for the trust between customer and service provider and between the different parts of the service provider’s organisation. Finally – and there may be more parallels we could develop – having a good level of skill to rely on is essential: I do play the guitar and have a few skills that would carry me through a few bars of improvisation but my acting skills aren’t well developed enough to entertain more than a few games of charades. However successful improvising is also about having confidence and removing self-imposed constraints – unlearning techniques (and bad habits) as much as learning new ones.

Great service happens when people are able to throw away the script to do the right thing for the customer and when they can trust all the actors in their organisation to work the same way.

How much improvisation takes place in your organisation?