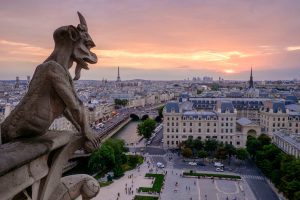 If you want to lay the foundation for superior customer service then one of the enablers you need to put in place is to make sure people have a basic level of etiquette or good manners.

I was recently on holiday in France and was struck by how French people are conditioned to be polite by comparison with the British. Carry out most transactions – however mundane – and you will be greeted with ‘Bonjour’ at the start and ‘Bon journee’ at the end – that’s the equivalent of ‘Good day’ and ‘Have a nice day’ to book-end the interaction.I noticed that this was not confined to counter-service shops or restaurants, where you might expect it, but also to motorway toll-booths and supermarket check-outs, where you probably wouldn’t.

I’m not saying I came away from all these transactions with a warm glow that made me want to return – in the case of the motorway toll-booths I had no choice – but it did make me think that a lot of customer interactions in Britain missed this foundation level of etiquette upon which a superior service could be built. (As if to contradict this statement I received a package from UPS the other day where the delivery man began with a cheery ‘Hello’ and closed with a genuine-sounding ‘Have a nice week-end’ but these are still few and far-between.)

The author Lynne Truss in her book Talk to the Hand devotes many pages of ‘forensic polemic’ (her term but I like it, too) to deploring The Utter Bloody Rudeness of Everyday Life. (In fact on re-visiting it just now I discovered that she uses French politeness as an example on the first page of the introduction.) She has a point: there are many examples where society is becoming less and less polite. We’ll leave Ms Truss to explore the reasons why but, if indeed that is the case, then it’s more and more important for organisations to distinguish themselves by ensuring their employees maintain a basic level of etiquette.

(We do seem to have lost the plot on this one. For example, I rang Pru Health to discuss a quote this morning. The transaction was quite a pleasant one and the advisor was helpful but, once she’d established my name she said ‘Can I call you Nick, today?’ Leaving aside the slightly strange option to be called Nick for one day only it strikes me as bizarre not to call me ‘Mr Bush’ by default. It would be polite and really wouldn’t be over-formal: after all, we’re discussing health insurance not going on a date!)

What, then, can organisations do? It’s counter-cultural in this day and age but I would recommend going back to basics and teaching basic politeness/etiquette to front-line staff because – until some policy wonk in the Department for Life Skills decides it should be a national programme (please, no!) – it seems that, in the UK at least, no-one else is going to do it. Like all training in behaviours it would need to be done without being patronising or over-prescriptive but it would be a distinctive competence.

So whilst society trundles off to hell in a handcart full of people playing loud music on their mobile phones and telling you to bleep-off if you complain, you will at least have had the satisfaction that your organisation was the one that remained a beacon of politeness and civility – and stole customers from the ones that didn’t take the trouble.