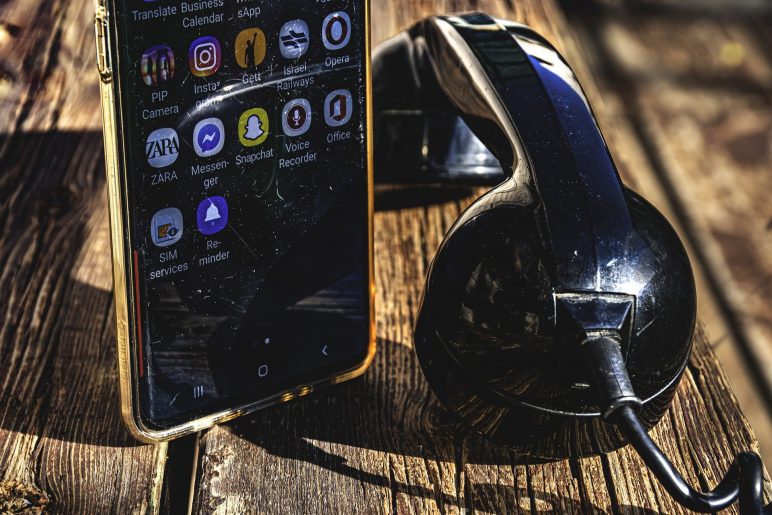 For those unfamiliar with the band – and their low number of Spotify followers suggests they won’t be selling out stadiums for a while – they are a Dutch trio playing modern jazz but using found sounds, news clips and so on as the basis for some of their pieces. (If you want to hear someone jamming ironically to clips of Nigel Farage, this band is for you.) This is nothing new as bands across all kinds of genres have been doing this for a number of years. What is new – at least in my experience – is the use of an app to enable audiences to participate in the performance by, for example, suggesting names or phrases that can be translated into musical note sequences or indeed using the app to compose simple motifs that can be the band can then interact with.

However, it’s the enforced separation of lockdown that means this technology can really come into its own and shows how creative thinking might take concert-going in a new direction as we emerge into the “next normal”.

In a concert that was part of Royal Welsh College of Music and Drama’s annual jazz weekend recently the audience was invited to imagine we were leaving Earth on a spaceship for another – less environmentally challenged – planet. With Tin Men providing the in-flight entertainment, the app made the audience part of the show as well with competitions for the name of the new planet and suggestions on environmental improvements solicited – and used to create note-rows to improvise against. This is a personal reaction, but I found the tech more memorable than the music. Nonetheless, there are some takeaways and lessons for those who are looking for the longer-term success of their organisations – whether commercial, artistic or whatever – post-pandemic.

The following questions are particularly pertinent:

Where is your customer?

We attended a gig “in Cardiff”, in the sense that it was organised by RWCMD, but we could have been anywhere in the world with a decent internet connection – in this case my living room. This will be much more common post-Covid and organisations previously dependent on people physically turning up to a location will need to provide means of remote participation. Just as we’re now surprised if a retail organisation doesn’t have an online ordering capability, our expectations of online will widen to concert and theatre experience providers.

How are they included?

If your audience/customer base is widening how do you include everybody? This doesn’t mean just by having an app that may enhance their level of communication, but it means thinking about the nature of that engagement. For example, the Tin Men’s environmental/intergalactic trip was one story on which people could hang their concert experience – what is the story you want to tell, and how does it chime with the one your customers want.

What capabilities do I need in my team?

In the business world we’ve long been used to having IT people – formerly a mysterious separate breed – increasingly integrated into teams and business units so that product or service development is tightly bound to the digital channels used to deliver them. In my experience the performance world has still to make major strides in this direction. Businesses are starting to recognise that the development of gaming might have much to offer their thinking about customer engagement, but in the music and theatre world there are as far as I am aware very few hybrid approaches that potentially engage audiences differently and/or engage new audiences. Theatre companies, orchestras and other music groups should all be finding ways to collaborate with technology innovators and developers to ensure their core product can be accessed by as wide an audience as possible.

I am sure that in the increasingly fragile world of live jazz, Tin Men and the Telephone’s app-driven antics will distinguish them from the many piano-bass-drums outfits performing today and keep their music alive for a good while longer. Other organisations should take note.

Image by Ri Butov from Pixabay