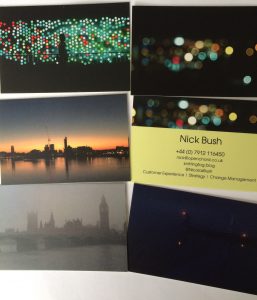 In a week of customer experience lunches I re-discover that it pays to complain, get creative online and wish more people were like the #timetunneltrain driver.

Fay Maschler, restaurant critic of the Evening Standard publishes a diary of what we might call her meets and eats alongside her weekly review. Mine lunch dates aren’t quite as grand but I contrived to have three separate lunch meetings with some customer experience chums so I might as well give you some quick reviews Maschler-style…

Monday: meeting with John Sills of The Foundation where we had tasty burger and fries courtesy of Big Chill – a funky bar that looked like it had the potential to be a rammed vertical drinking establishment in the evenings but was enjoyably quiet at midday.

Tuesday: to CanaryWharf where my friend had booked us a table at Rocket. The ‘famous beef and chip salad’ probably deserves its fame, if not the price tag. The lengthy wait for our food did not amuse however.

Thursday: a more modest outing at All-Bar-One in Tower Hill where an avocado/chicken salad and fries on a meal deal satisfied whilst doing less damage to the wallet.

In customer experience terms, Big Chill offered genuinely friendly service and All Bar One was just OK. Rocket however were the source of a complaint which allowed them to turn this customer to, if not a raving fan then a non-detractor. My companion and I were deep in conversation (about CX of course!) but became aware of creeping hunger pangs and noticed that about 40 minutes had elapsed since our orders were taken. We beckoned the waitress over and asked what had happened to our food, to be told that this was because the restaurant was busy. This is the worst excuse a restaurant can offer but, being somewhat taken aback, we didn’t say anything other than that we were hungry.

I checked the bill the following day – no deductions offered for the poor service – to see if there was a feedback link (that’s OCXD for you). There wasn’t one so I went on the website and found a contact form and fed back on my experience. Within a couple of hours I received an email from the manager offering a full apology, a commitment to investigate and feed back and an invitation to return with a significant amount of money off as an incentive (easily enough to cover a couple of famous chip salads). This makes me inclined to give them a second chance, as they illustrated best practice in complaint handling:

In complaining I wasn’t seeking a free lunch but I am reminded that complaining is a good thing for both customers and businesses.

Two examples of a services that allow customers a degree of creativity and provide a seamless online experience:

The non-response from Runnersneed has continued to irk me so I sent in an email to chase via an address I found on the website. This time I had a response within 30 minutes, with an apology, a request to re-send the feedback and further information on the gait analysis service – the area I was feeding back on and therefore sufficient ‘redress’ in this case.

On sending the feedback again I received a response (just over an hour) with a further apology and a promise to pass the feedback on to the store, whose manager would contact me. This bit hasn’t happened yet so, as time goes on, I am not convinced that the process works end-to-end i.e. there’s a commitment to action that hasn’t been fulfilled.

Rather like this would-be runner, this one limps on…

A missed call on my mobile and a quick online check reminds me that the National Trust had called me earlier in the week and I had deferred it. Worried that it might not be a legit call I had an online chat with them. Apparently the call was because I had cancelled the direct debit, which I had done to terminate my membership. Within a few steps the chat advisor was able to do this for me. All pretty straightforward.

And so to feedback… 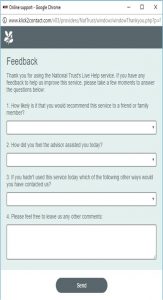 Immediately on finishing the chat a pop-up asked me what I had thought of the interchange and whether I would recommend it. I fed back that I thought it was great but I couldn’t see myself actively recommending it – even in the Bush household I’m unlikely to have a conversation that goes something like ‘Wow, you should really contact the National Trust, via their online chat because they’re just fab…’. I’m building up to a major rant on the misuse/overuse of NPS-type approaches so watch this space…

The obsession with feedback continues with email requests from Runnersneed for feedback on their advisor’s performance. At least this hasn’t asked whether I would recommend Runnersneed, their advisor or the use of email as a communications mechanism.

Funnily enough the one service I have recommended is one that wasn’t desperate to know what I thought of it (Moo). Perhaps they figure that with a well-thought through journey the only feedback they’ll need is if it doesn’t work and someone complains. I could of course complain to them that they didn’t seek my feedback but that might be going too far. (Postscript: somewhat disappointingly, given the preceding comment, an email arrived in the early hours of the morning following this post soliciting my feedback. It was a pure NPS survey: a recommender score and a ‘what would you say when you recommend’ question. For the record I scored Moo 9/10 and my comment, should we be having a chat about business cards, was to the effect that they weren’t the cheapest but the service was easy to use and the results were impressive.)

This train is bound for glory

In this case the #timetunneltrain that alleviates the lot of Southern Rail commuters. I’m only appreciating this secondhand via Twitter and some online articles (one including my tweet about it – fame at last!) but driver and former DJ, Steve Copley, fires out trivia questions associated with a particular year and then invites commuters to write their answers on Twitter using #timetunneltrain. The only sad thing about this story is that he appears to be something of a rarity… #morelikethisplease.