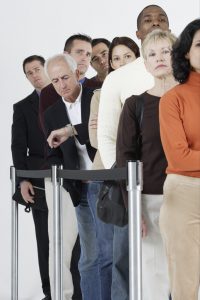 You can’t talk about customer service for long without queues coming to mind. There’s been a lot of coverage recently about queues in relation to the UK’s border controls fiasco at Heathrow Airport and the rather grumbling response to all this has rather missed the point – queuing is not always a bad thing and, moreover, it’s an opportunity to demonstrate great customer service.

Let’s get something out of the way first though: queuing is rarely fun, so the prime aim of any organisation aiming to build a reputation for superior customer service should be to minimise the amount of time a customer has to spend waiting. However, the presence of a queue does indicate demand for whatever is at the end of it – the lengthy queues forming up outside some lunchtime food joints in the City attest to this – so having something that’s worth waiting for can be part of your proposition as it carries a veneer of exclusiveness (night clubs operate on a similar principle).

Getting through passport control rarely has that kind of buzz though – however desirable the UK might be as a destination or however keen you are to return home – so the challenge facing the UK Border Agency is more prosaic: how to keep the queues down without compromising border controls. I don’t claim to have anything more imaginative as a solution than making more people available (and paying them) to match peaks in demand – a continuous challenge for all service organisations – and if the Border Agency doesn’t have a core competence in this area it deserves all the brickbats it gets. But I have experienced some examples of good queuing that I offer up as indicators of how to do these things a bit better.

Be alert to special needs

The predominant focus has been on VIPs getting fast-tracked through passport control but there are other less public figures who need attention. Airports are not great for those who can’t stand for long periods and when my wife (who has osteo-arthritis and uses a stick) and I arrived at New York’s JFK last year we were anticipating a long wait when we saw the queue snaking slowly through the passport control booths. However, as we came down the ramp a service attendant waved us through to a queue reserved for people with mobility issues which shortened the wait time considerably. This wasn’t the only example during our week in NYC either – any place where there are crowds and queues seems to have a number of service employees around whose mission in life is to make sure that people less able to stand in line get special treatment. The contrast when we returned to Heathrow – and, yes, it was the now-infamous Terminal 3 where we arrived – could not be greater. There were no people managing the queue – which was substantial – and one bored looking attendant on the VIP desk. Emboldened by the New York customer service ethic we approached the desk expecting to make the case for special treatment but were simply waved through. This was great but the mute wave simply didn’t stack up against the genuine concern shown by the US counterparts that anyone with a stick shouldn’t have to stand longer than necessary.

Queues are about people, people

It follows from the above that it takes people interacting with people to make a queue less stressful. Years ago the Post Office had the idea of relieving the tedium of queuing by installing video machines at the head of the queue to keep customers entertained. My personal reaction to these sub-JML  adverts was to arrive at the counter in a more stressful state that if I had been queuing in relatively-blissful silence. A better example of how to do it properly is provided every year by the queues outside the Albert Hall for promenade tickets. Here you can queue on the steps – in sunshine if you’re lucky – and the whole thing is patrolled by Albert Hall staff in a relaxed and genteel manner. They distribute raffle tickets so that you have a numbered place in the queue so that if you need to leave the queue to go to a pre-Prom talk or to get a cup of coffee you don’t lose your place. Brilliant – and sometimes more pleasant than the sauna that is the Albert Hall on a warm night.

I haven’t the space right now (or the inclination) to go into the whole topic of automated, self-service and its impact on queuing. It has its place, obviously, but I am wondering if we might have gone too far down that route. Recently I saw a tweet from the South Bank Centre suggesting that people trying to get tickets for the Meltdown festival might be better off calling the booking office instead.

Make the destination worth queuing for

People queuing to get into a concert, club or whatever are usually doing so because what they are queuing for is worth the time spent. However, sometimes a queue is necessary for a more mundane purpose so whether it’s getting stamps at the post office, waiting to speak to a tax adviser or buying train tickets your customers deserve a friendly greeting and a great experience. If your product is worth queuing for, it’s worth doing.