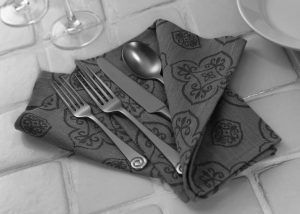 At the risk of turning this blog into a restaurant column, John Maeda’s excellent simplicity blog features an interesting item on his visit to a restaurant where his white table napkin was removed and replaced with a black one. Maeda treats this as an example of trust – by demonstrating an attention to detail.In this case the purpose of the colour change is to ensure that the diner does not get white lint on their clothing, something that I must admit has never been a problem for me up to now, but it does show that the restaurant in question cares about even the most trivial aspects of their customers’ experience.

This made me think more widely about what might constitute ways in which an organisation might create trust with its customers and, specifically, demonstrate an attention to detail that would turn a functional customer experience into a superior one.

There are some obvious ones such as ensuring that appointment times are kept to. (I have a very recent example of this: I had to call Homeserve yesterday to sort out a plumbing emergency. They turned up exactly when they said they would and fixed the problem in a matter of minutes.) Companies that can’t get this right incur a massive cost of failure and loss of goodwill caused by customers having to repeatedly call in to re-arrange appointments and re-sending the engineer to do the work.

It’s not just the end point of the customer journey that demonstrates trust though. Commuters in London will be used to periodic delays on the bus or underground. I find it much less stressful when I’m on a train that’s delayed in a tunnel somewhere if the driver announces why this is happening even if it’s a trivial reason like waiting for another train to vacate the platform. This simple action acknowledges that customers may be stressed and that the driver – on behalf of London Underground is – taking action to address this. Why this isn’t standard practice is a mystery to me.

Customers will be prepared to trust you if you trust them to be tolerant of delays or mistakes, particularly if these are unavoidable.

The recent problems with Northern Rock have also illustrated the crucial role that communication plays in creating trust. Had Northern Rock been clearer to its customers earlier on about the security of their savings, the massive number of withdrawals might have been prevented or at least reduced. In Northern Rock’s case it had done quite a bit to engender trust in other ways: one story shown on the news concerned a woman who deposited some money during the crisis as the bank had shown considerable support to the charity that she ran: she was reciprocating the trust. Whether this, and other examples of Northern Rock’s support for local causes in North-East England, will be enough to save them remains to be seen.

The lesson from these disparate examples seems to be this: anticipate your customers problems – even the ones they don’t know they have (like white napkin lint) – and take early action to address them. And make sure your action is clearly communicated.

[2017 update: I had to find a reason to use my Frank Zappa tag – here’s his excellent piece Black Napkins]