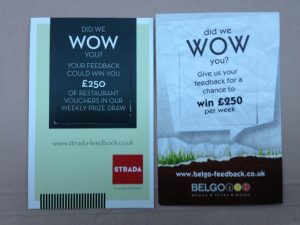 It’s an occupational hazard of this line of work that I feel obliged to fill in online feedback forms whenever the opportunity is presented. Recently I’ve been invited to do so by two outlets operated by Tragus Group – whose website proclaims they are one of the UK’s largest casual dining groups and their brands include high street favourites Strada, Bella Italia and Café Rouge. As they use the same survey engine it seems a good opportunity to promote a Service Smackdown bout between two evenly-matched  opponents: in the red corner, armed with several bottles of lethal brew, the Belgian Bruiser that is Belgo; in the blue corner, with an audience of adoring fans across the country, I give you Strada! Seconds out…

I’m not sure what I feel about the term casual dining – it seems to bring an image of Bing Crosby crooning in a golfing pullover to mind, and a feeling that someone is going to use the word ‘slacks’ very soon – and suggests that an atmosphere that might lack a sense of occasion takes precedence over the cooking. In the case of our two contestants here this doesn’t apply.

On our way to a gig at Camden Town’s Roundhouse, Belgo Noord served up a more-than-passable moules frites, perhaps a little over-stated on the onion, and a haddock and chips that my wife – something of an expert on the topic – pronounced as amongst the best she had ever eaten. Washed down with a not-too-heavy Belgian beer this was a good way to start the evening. I like the quasi-industrial space at the restaurant, too.

Food-wise, Strada has rarely disappointed me. As countless TV chefs will intone, it’s all about the quality of the ingredients, and these are spot on. Wines are perhaps missing the mark a bit these days and prices are trending up but we used the Taste Card 2-for-1 deal for both meals, making both a relatively cheap evening out. Atmosphere-wise Strada Putney, to where we had retired to avoid the hordes of local trick-or-treaters – is more comfy-cosy than the Belgo outlet but was busy enough to still have a buzz about it.

So far the food and atmosphere rounds have been pretty evenly matched but this is a service smackdown so will this produce a winner? Yes, in terms of experience and the subsequent rating I gave, Strada won hands down and Belgo appeared to throw the fight.

Here’s what I look for in a superior service restaurant experience: taking the order and getting edible food to the table on time are the basics – not everyone can get these right as a poor Pizza Express experience recently confirmed – but restaurants sometimes don’t realise that, even at the casual end of the market, going out to eat is an event for the customer and therefore for the whole visit they need to feel welcome.

At Strada we had a warm welcome from the manager who appeared happy to see us arrive and, despite a cheap-and-cheerful approach to our three courses, offered us a limoncello at the end of the meal. We got a friendly farewell as we left. At Belgo the service was on-time but off-hand, the staff didn’t appear particularly pleased to see us and nobody said goodbye as we left.

These are simple things to get right but the contrast is such that, whilst I will happily return to Strada before next Hallowe’en, the temptation of further exploring Belgo’s beverage list will be offset by the memory of the service we experienced.

Restaurant critics tend to berate chains for over-priced sub-standard food and causing the nation’s high streets to become bland and samey. The latter is a valid point but the great thing about chains is that when they get the product and customer experience right – and have staff who appear to be genuinely customer-motivated – their reliability and reproducability will ensure their success.