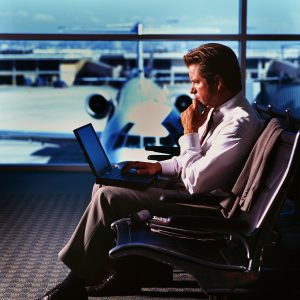 I didn’t set out to theme this year’s blogs around films but as all consultants know, two data points make a trend, so maybe I’ll continue to do so (although I’m planning to see The Wolfman soon so that could be tricky). After finding a service message in The Road it’s much easier for me to find one in the latest George Clooney vehicle Up In The Air. But it’s one that challenged my own ideas of superior service.

You can read perceptive reviews of this new film from the director of Juno elsewhere so I won’t dwell on the plot too much except to say that it’s one of the few movies I have seen (possibly the only one come to think of it) that deals with customer service and loyalty so explicitly.

Clooney plays Ryan Bingham, an executive at the sharp end of HR outsourcing i.e. his firm gets hired to do that tricky job of telling people they don’t have one any more. (An authentic note is struck by using non-actors’ recreation of their own reactions to hearing such news – and if you go and see it, stick around for the phone message half way through the end credits.)

It’s a bitter-sweet tale which is driven by Bingham’s isolation from any major emotional connection: he’s all smooth-talking and sincere in the act of firing (hey, ever since ER we’d all like George Clooney to deliver bad news to us) but it goes no further than the few minutes of the interview. Since his job involves flying from city to city day in, day out he has constructed a world where he is largely insulated from the harsh reality of his day job (and also the harsh reality of life, but I don’t want to spoil the plot too much) by the niceties of superior service – the kind of service that loyal, valued customers of airlines, hotels and car rental would expect to get.

The nice thing about Up In The Air is that it resists the temptation to poke fun and the whole ‘have a nice day sir’ ethic of customer service. But I found myself wondering if that was the point: Bingham’s interactions with service personnel are as impersonal as his firing interviews with his clients’ staff and they are conspiring to create and sustain his sense of emotional alienation.

Does this invalidate my whole approach – that superior service is about leaving the customer with a positive emotional connection? Are bland platitudes the best we can expect? And is this basically wrong?

The answer is both yes and no: I still get my morning cappuccino in Pret A Manger on the way to work and 99% of the time it’s served with a phrase along the lines of milk-and-sugar-are-right-behind-you-by-the-door-you-have-a-lovely-day-now. On the one hand it’s bland and meaningless – everyone gets the same treatment – but on the other hand it makes me think, momentarily, that someone cares that I have a nice day. And that’s better than being served in near silence.

Superior service is about creating moments of magic that cut through the bland phraseology of day to day transactions – but it needs to build on a bedrock of basic politeness that those phrases represent. That way superior service gets to be a regular occurrence. So I salute Pret for providing me with cappuccino and a cliche because I know that it forms the basis of a culture where moments of superior service do happen.