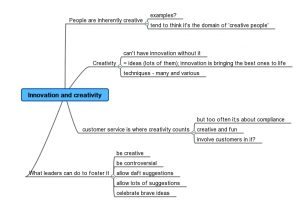 Most organisations suffer from a wariness of creativity stemming from the myths that I outlined last week. As a consequence, organisations typically don’t set out in an intentional and systematic way to build and maintain their creativity – and this is a wasted opportunity.

This fear of creativity stems from the myth that it’s only creative people that are creative and that if you let too many of them loose on your organisation everyone will end up doing interpretive dance or playing the nose-flute instead of turning out world-beating widgets. Creative thinking thus gets boxed in and techniques and approaches that will help stimulate it get confined to offsite meetings and awaydays.

Take mind-mapping for example. Go to most innovation sites and you’ll see people promoting mind-mapping tools and approaches so it’s clearly something that helps people improve their creative ability. Spot someone in a business meeting drawing a mind-map and it’s a bit like discovering they have some exotic character quirk or esoteric religious belief.

This is even more bizarre since it seems – on a small sample of one primary and one secondary school – to be something that children are encouraged to get comfortable with doing. For children who don’t naturally sit down and turn out 500-word essays – i.e. most of them – it’s a positive benefit.

I must confess I use mind-mapping intermittently but often do to prepare one of these pieces and the one I developed to get ideas for this set of posts is in the picture came from Mindmeister which provides a free and shareable mind-mapping resource. I find it’s helpful in seeing linkages and gaps in my thinking as well as enabling me to structure my initial ideas.

We’d all benefit from using mind-mapping on a more regular basis but it’s not the be-all-and-end-all of creative techniques. There’s a whole raft of techniques that can be used to provide people’s brains with a bit of shaking up. Brainstorming (or ‘thought-showering’ if you must) is the best known but that’s often practiced in a way that doesn’t really get a lot of benefit. Meeting leaders need to be rigorous about applying the rules and there are plenty of sites offering this guidance – MIT has good set. Something that’s often omitted though is getting people to warm up and it’s usually a good idea to practice on a light-hearted topic first – see Roger von Oech’s idea here – or use an ice-breaker exercise to warm up the meeting.

What leaders can do

You can find a vast array of creativity techniques on the web so I won’t take up space listing them here but as a leader at whatever level in your organisation you need to be actively encouraging people to be more creative, more often.

Here’s a list of suggestions to help lead creativity: